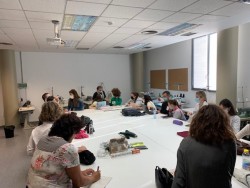 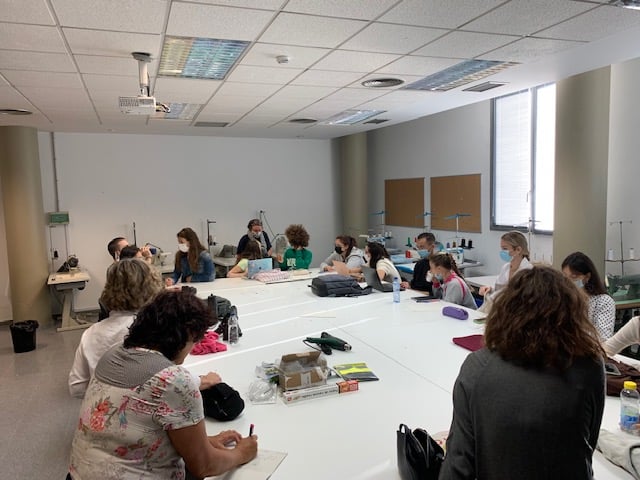 This innovative project proposed to students is part of the Erasmus+ program. The Haute Ecole Francisco Ferrer (HEFF), based in Brussels and specialized in textile design, has received funding from EUROPE to carry out the entire project with various partners including two other higher education institutions, the ESNE, based in Madrid and specialized in design and fashion, and ITECH. ITECH is part of this European project for the recognition of its skills in the field of materials, especially textiles, and for the transdisciplinary approach used to conduct a project. Another non-academic partner is associated with the project, the European Space Agency (ESA based in Luxembourg).

Since the goal of the project is to move from an idea to an industrializable product, the choice of ITECH is obvious because of its strong relationship with industry and its capacity for immediate transfer to society. The project also insists on taking SD&SR issues into account in the projects. The teams must therefore integrate the impacts of the raw materials used and the entire development process, guarantee recyclability or at least think about the recovery of the product at the end of its life. The project must also prove that it meets a priority societal need in the face of the urgent need to change the vision of the notion of progress in our modern societies.

The major objective of this project, which also makes it so innovative, is to accompany a whole process of creativity over three years, from the idea to the prototyping, to consider industrialization at the end of the last year. For the realization of the project, the three institutions associate five of their students each year and provide the necessary pedagogical support to develop the ideas of the student groups.

Five teams (each composed of 3 students, 1 per institution) have been formed to start the first year of the project.

The project was therefore presented to the 1st year students 3 years ago. As there were only five places available and given the interest shown by the students (25 positive feedbacks), it was necessary to organize a selection process taking into account a certain number of criteria that seemed relevant and fair (CV, cover letter, assessments of the ITECH admission interview, foreign languages spoken, respect of the deadlines for submission). Following this initial selection, 10 students were selected.

For the final selection, the 10 selected students were asked to attend a 10-minute interview. The students had to present a slide to answer an identical question, asked beforehand: “What technological innovations do you imagine for the future?” The goal was to evaluate their ability to produce ideas and to put them in a form.

Following this presentation, a different “secret” question was asked of each student. This question was of the type: “Among the innovations you presented, how do you imagine a transposition to an application in the field of the automobile, health, sport, well-being, aeronautics, etc“. The field of application changed for each student. The aim was to evaluate the reactivity, spontaneity and creativity of the students, three important aspects in the project to be carried out.

In the first year, the 5 selected students were able to carry out this project as part of a compulsory course: the transdisciplinary project.

The 5 students were evaluated at the end of the first 2 workshops on a report and an oral presentation. The result was an enriching human and cultural experience.

The five projects initiated during the first workshops led to innovative ideas, more or less easy to implement.

Most of the ITECH students wanted to continue the project the following year.

One student having resigned from ITECH, one of the students who had not been retained during the first selection has replaced her.

In the second year, the students having integrated their speciality; the team is made up of 1 student who is in the MP speciality, 3 in the Chemistry of formulations speciality and 1 in the textile speciality.

In the first semester, the project was carried out within the framework of bibliographic research. The students therefore submitted a bibliographical study on the Utop Textile project instead of a more traditional subject usually given to students.

In the second semester the students chose to pursue the UTOP textile project in parallel with their teaching and not in place of one of the courses.

At the same time, a group of 4 second year Textile students were involved in a compulsory tutored project. This external reinforcement had the objective of maintaining the dynamics and to advance the subjects between two workshops of the UTOP program.

In the second year, the WS could not take place as planned due to health conditions. A virtual WS was organized. The conviviality and seriousness were there, but the practical part could not be done, which delayed the achievements. Lecturers intervened to sensitize the students on various important points during the development of a project.

In the third year, 2 students resigned from the project because it represented too much work. A new student from the textile speciality therefore joined the project.

The UTOP project has progressed with 4 ITECH students

This last year started with a WS that took place in Valencia and ended in February in Brussels with the prototyping of the imagined products.

The students can be proud of their prototypes. This allowed them to discover various techniques such as laser cutting, 3D prototyping, embedded electronics, shape memory metals, and many others.

A protection of the ideas was set up for the most innovative projects. Some students wish to continue the adventure after their TFE, outside the UTOP project.

The UTOP Textile project has been a rich experience for the students but also for the teaching staff who participated in the workshops and supervised the teams in order to advise and avoid any blockage. UTOP Textile was a great human, international, multicultural and multidisciplinary experience for all.