Lyon is one of the largest cities in France. In fact, it is the third largest city in France. A big city like Lyon has, therefore, several means of transport to help you get around comfortably. However, if you are used to small cities or if you come from another country, transport in Lyon can be confusing at first…

But don’t worry! At ITECH we’ll explain how it works so you can master it in no time at all.

Let’s start with the public transport network ran by TCL. It operates metro, tramways and buses. The network is pretty efficient and easy to navigate with. Before you start searching for a place to live, we advise you to check for places with a close access to a bus stop or metro stop if you wish to take it to come to ITECH.

It is the best option to move around Lyon. It consists of several lines that connect the city center, the suburbs, train stations and popular neighborhoods. It even connects with the funicular in case you want to visit Fourvière during your free time (and you should, the view is beautiful!). 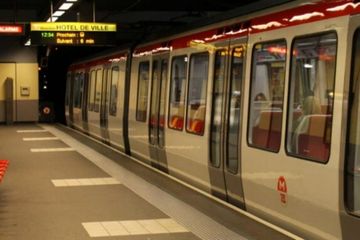 While for some it may seem the slowest transport method, buses in Lyon are pretty useful for some destinations. For instance, you will need to take one to come to Lyon (specifically the C6, C6E or C3 lines). Moreover, it will be the only public transportation method you will find if you choose to go out and stay up till late during the weekend.

Whereas the metro is the transport preferred by most people in Lyon, there are some areas that aren’t reached by it. For those metroless areas, you can use the tramway. Of course, it isn’t as fast as the metro but it serves the outskirts and nearby suburbs.

How much does a ticket cost?

All the tickets your purchase can be used on the whole TCL network. For 2022, the public transport fares in Lyon are the following:

Where to buy a TCL ticket?

You can buy a TCL ticket at a tramway or metro station (using ticket machines), at TCL agencies, at service points, on TCL’s mobile app, and you can purchase it directly on the bus (however, the single ticket would cost 2,2 euros instead of 1,9 euros).

Find out where is the nearest point of sale for you on TCL’s website.

Do you wish to do some sport while moving around Lyon, enjoy the fresh air and get to know Lyon better? Maybe a bicycle would suit you better. The city of Lyon is well arranged for cyclists, since they are seeking to reduce car usage and incite people to use eco-friendlier transport methods.

Of course, you could buy a bicycle or an e-bike (with a good-quality bicycle lock), but you could also rent a bicycle. In fact, Vélo’v offers bicycles on self-service available all around the city (428 stations).

You can rent a bicycle for a single ride (1,8-euro ticket), for a day (4-euro ticket) or for a year (16,5-euro annual membership for 14-25-year-old people). By subscribing to the annual membership, you will be able to take as many rides as you wish. Be careful however, only the first 30 minutes are included (but you can always dock it in one of the Vélo’v stations and take another one immediately, the timer will restart).

When you arrive to Lyon, you will notice a big number of electric scooters laying on the street without any type of locks. These are self-service electric scooters offered by different companies. You can rent them through the company’s mobile app. Fares differ from one company to another, so don’t hesitate to check them before renting one.

TCL (public transport network)Vélo'v (self-service bikes)
This site uses cookies to optimize your browsing experience. By continuing your visit to our site, you consent to the use of Cookies.I acceptRead more